Good drainage can help protect your listed building from damp, provide water for your garden, and can even be an attractive feature in its own right. In the second of a new series Landscape Architect Marian Boswall explains how to make sure you get this important aspect of your garden design right, from the roots up.

England’s green and pleasant lushness can come at a price for those of us who live in old houses. The rain that keeps the fields green and the lawns growing can penetrate our walls and our windowsills, causing damp patches, green algae and creating the perfect habitat for damp and its associated housemates rot and insects. These houses were made to breath and surface treatments should respect that intent, by using lime mortar instead of cement for example. My 1490s house sits on clay which provides an old fashioned sort of air conditioning: in the summer the clay dries out to create cracks that allow in the sweet breeze from the field, and by January the wet weather has swollen the clay and closed them up again. But not everyone is as sanguine about their house moving to the earth’s rhythms, so how can we celebrate the rain that gives us the gardens of England, whilst keeping our feet dry and our houses free from damp?

One of the first things you need to understand is the soil and underlying geology of your house and garden. Sandy soils are free draining, allowing water to get away more quickly, whereas clay soils tend to be more impermeable, holding water to become waterlogged in winter and drying out to crack in a hot summer. This tends to dictate the drainage strategy to adapt.

The second thing is to understand water. Water is a predictable material which always flows downwards along the path of least resistance, and when it freezes it expands by 9 percent. If water is allowed to congregate at the bottom of your walls it will penetrate the brick and be slowly absorbed upwards, causing rising damp. If it gathers and then freezes, its expansion can cause pipes to burst, paving to crack and bricks to ‘blow’. Yet water is valuable, so by getting water to flow away from your house and into a reservoir or rainwater harvesting tank, you can store it to water your garden and even flush your loos in a summer dry period. 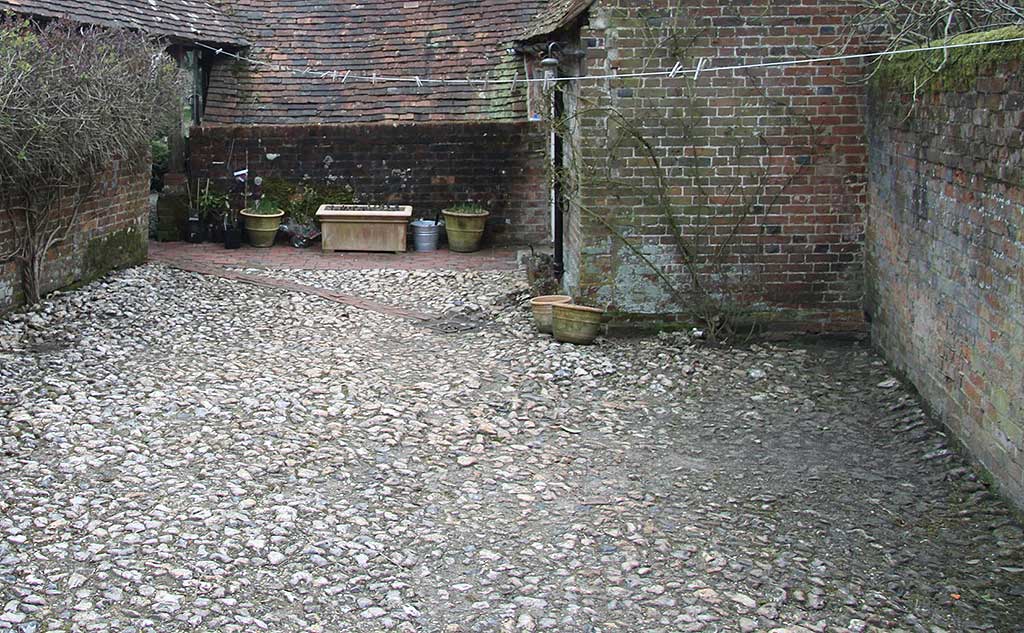 Getting water to flow away from the house is paramount. Gutters need to be in good repair and downpipes should be kept clear. They should outlet into gullies that can be cleared of leaves by simply lifting a grille, rather than cemented into the ground which can result in blocked water backing up before you notice it. This run-off from the house can be piped to an underground tank and stored to be used for hand watering or as part of an automatic irrigation system (in which case it will need an automatic mains top up). Water from drives and gulleys can also be collected but needs more in the way of silt traps and filtering to reuse on a domestic scale. This dirtier water can still be used to fill a pond or lake and so provide a beautiful wildlife habitat and create a valuable addition to the setting of your house.

Paving and terraces should slope away from the house. A 1 in 50 fall* ensures that water flows away quickly rather than sitting at the bottom of the walls. If you suspect that your drains are faulty it is a good idea to get a drainage test done by a good drainage company as part of your initial survey of the property. If it is necessary to slope towards the building (as it may be at a garage entrance) a drainage channel across the entrance will prevent water entering the building.

*For every 50 inches or 50 cms the paving goes horizontally, it will slope down by 1 inch or 1 cm.

A French drain will help ensure that no water sits at the bottom of your walls. Check the height of any air bricks or damp proofing and make sure that the ground level is 150mm below them. If that is the case you can usually install a French drain, which is a porous pipe providing the easy route for water to flow away, and a layer of free draining gravel above to allow water to get away from the surface quickly. The French drain can also be used at the edge of a terrace to discharge water you do not want to land on the lawn for example. Before excavating around your house have a word with your conservation officer to make sure you will not be disturbing any important fixtures. 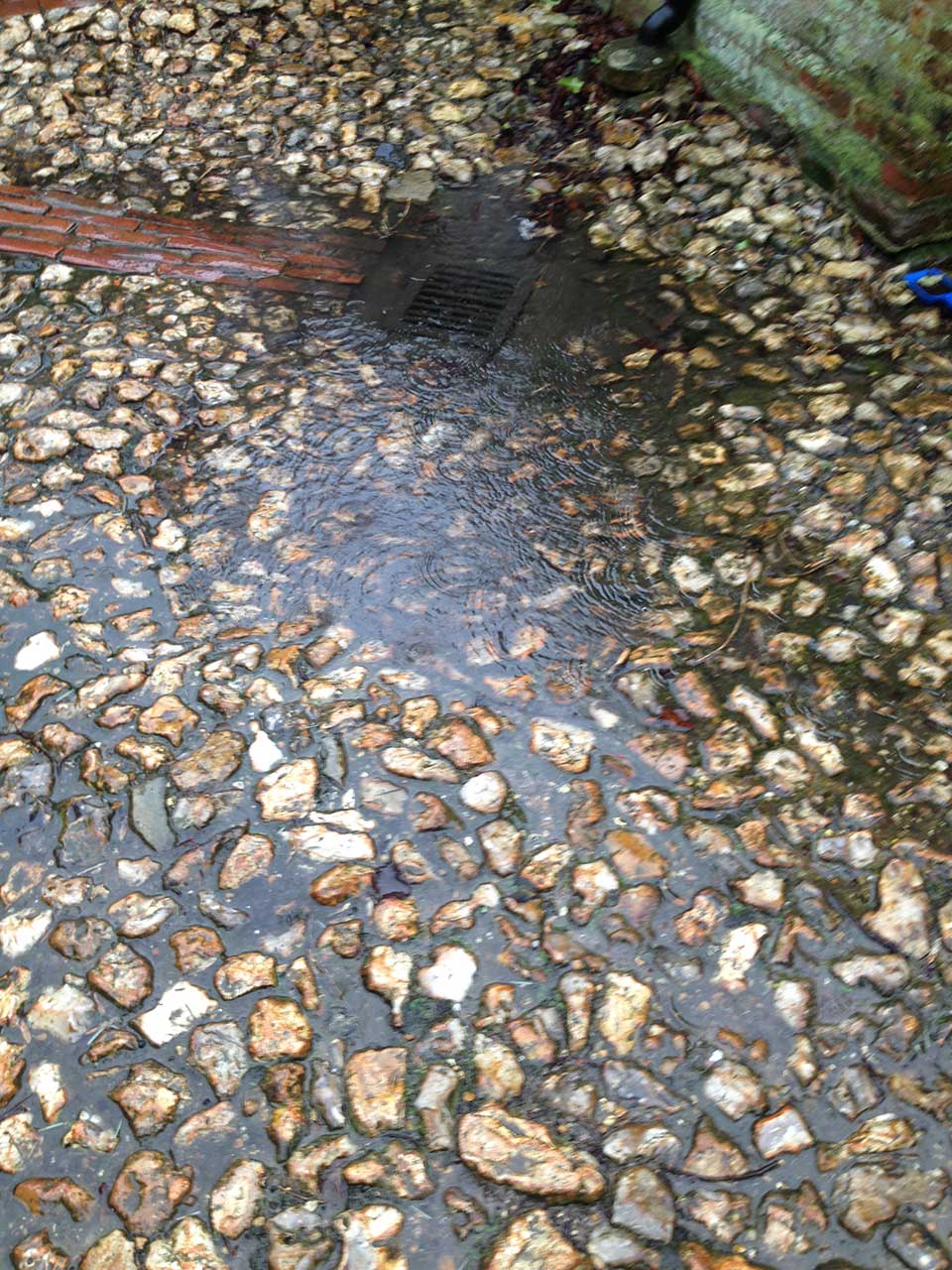 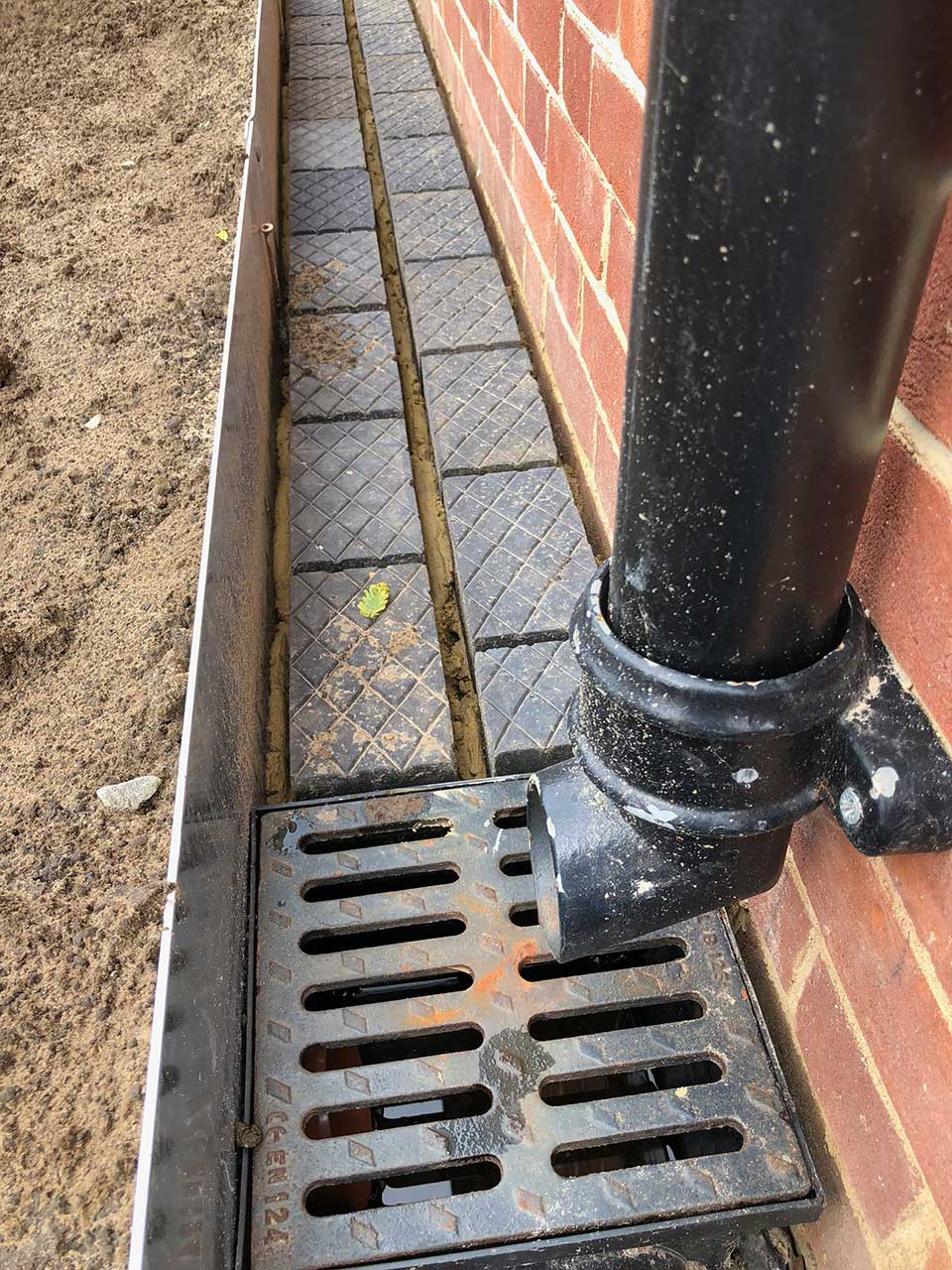 If the house sits low in the land you may need to create a breathing space around it to prevent water or saturated soil sitting against the house, and allow water to drain away. One solution is to retrofit a recessed channel drain in a material chosen to suit the period of the house.

Paths should be laid to falls to direct water into underground drains or into borders and ditches or laid to a camber to allow water to run off either side. This is particularly useful when there is not enough change in level to allow a fall away from the house. In this image below we used herringbone brick laid to camber with a Yorkstone trim, along which lies an ACO slot drain to catch excess surface water run-off.

If the house sits into a slope on one side you may need to stop water sitting against the walls. As a listed building needs to breath it is not generally advised to use waterproofing, but instead a composite geotextile which uses ‘air gap technology’, creates a buffer and can be reversed at a later date.

Old surfaces which are poorly drained can be lifted and re-laid with drainage included. In this Grade II listed house we gained permission to lift the cobbles of the family entrance; an old piggery which had become treacherously slippery due to poor drainage. We laid drainage below the surface and reused the old cobbles to create an attractive surface feature to drain centrally.

Permeable surfaces slow down run-off and help water reach the aquifers below. A gravel drive will slow down water running towards your house better than tarmac, but both will also benefit from ACO drains and gullies placed at key places where water gathers to prevent pooling and icy patches in winter. So when planning your outside drainage it pays to take photographs in the rain!

On heavy clay land drains may be needed to keep lawns and borders from water logging. The lawn below has a land drain under the grass and a discreet slot drain on the lower side of the lawn, which is laid to fall towards the drain and has an outlet into a ha-ha beyond. 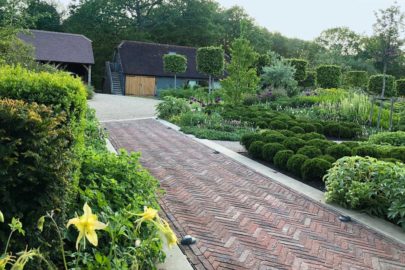 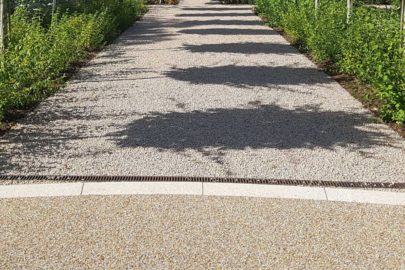 In a country setting, a drain may be as simple as a swale or shallow ditch to guide water away from your garden. These are good for biodiversity and can create an additional habitat to encourage flora and fauna to live outside your home, rather than share in the inside.

A good surveyor will be able to tell you the current state of your drains, and then planning the appropriate mitigation should form part of your long term garden plan. Excavations around a listed building may require planning permission or an archaeological survey, so do check with your conservation officer before starting work.

This article first appeared in the Listed Heritage Magazine July 2018 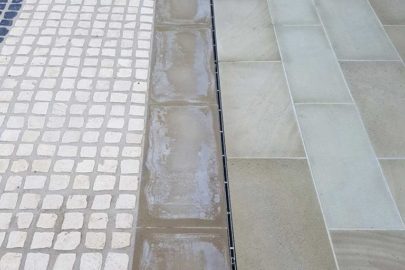 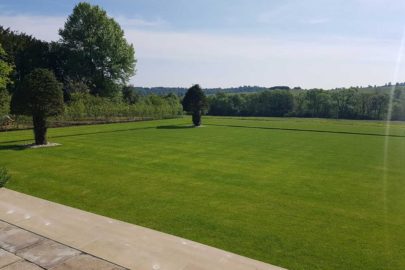