Wild windy and wet with a dash of wisdom

Following the recent death of Riverford Organics legendary founder John Watson at the great age of 93, I thought it a good time to revisit this blog post I wrote about him in 2006:

Most of my friends think we are barking mad – and I’m not sure about the less friendly, but it is true that camping in the almost guaranteed rain of our West Country is not everyone’s idea of a perfect holiday. However that is precisely what my husband and children like to do best, so I follow along each year, getting slightly better at making pancakes in the rain, and charting the location of every local swimming pool with military precision to allow a seemingly opportunistic visit to the shower to tie into each day’s outing.

The base for our wild and windy wet week is always my husband’s uncle’s farm in Devon, at the end of a creek which leads to the sea. On a really wet year when the sea came up to meet our tents, and I worried about my double mattress being washed away (a girl needs one luxury…) my husband was overjoyed, as he was able to canoe the whole way down to the sea with my son, as he had every year as a boy.

My husband’s uncle is an extraordinary man, and I would like to tell you about him.

He grew up in Trinidad, the son of a wealthy sugar grower, and came back to farm on Church Commission land in Devon as a young adult. The Church said a farmer needs a woman, so my mother-in-law moved in as a temporary land girl until a lovely wife was found.

With a non-stop enquiring mind John tried all the best methods of farming, which in the fifties and sixties meant all the best chemicals. Gradually he became disenchanted with the divorce between land and husbandry, and began to look into an unusual practice then, called Organic Farming. He started with pigs and a dairy herd. He has left a legacy to his children of one of the best known organic farms in the UK.

Riverford Farm now has country wide franchises that send organic boxes (run by son Guy) that include vegetables, milk (run by son Oliver) and meat (cue son Ben) to doorsteps all over England. Marketing is by daughter Rachel and young stock are brought up by daughter Louise.

Time to retire you may think, but John is determined to make this planet a better place, and to that end is experimenting with several types of renewable energy. He has a wind turbine in his orchard, a water wheel in the stream and last year was experimenting with a rather dodgy looking methane gas collecting pit – I had visions of us all going out with a bang in the night.

This year he has invested in a huge swathe of solar panels on his barn roof, and had been experimenting with rendering cattle bones in vats to see how much energy could be produced – this on behalf of some university or other. I was just quite glad he’d finished boiling bones by the time we arrived. He aims to live a carbon neutral life, and survives on a tiny amount of electricity and fuel year. The only time I have seen this kind and smiling man annoyed was a few years ago when one of my children went to the loo in the night, and left the light on.

At 80+ he runs a local organic vegetable gardening cooperative around these polytunnels, with a fabulous crop of veg, all lovingly tended under their half-plastic-bottle cloches and tied up with carefully reclaimed string. 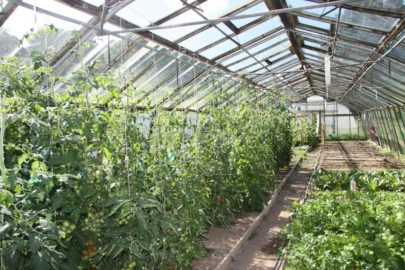 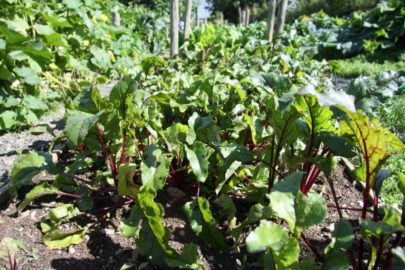 The children were intrigued to hear that this year we were sharing our orchard with a couple of ‘Woofers’. 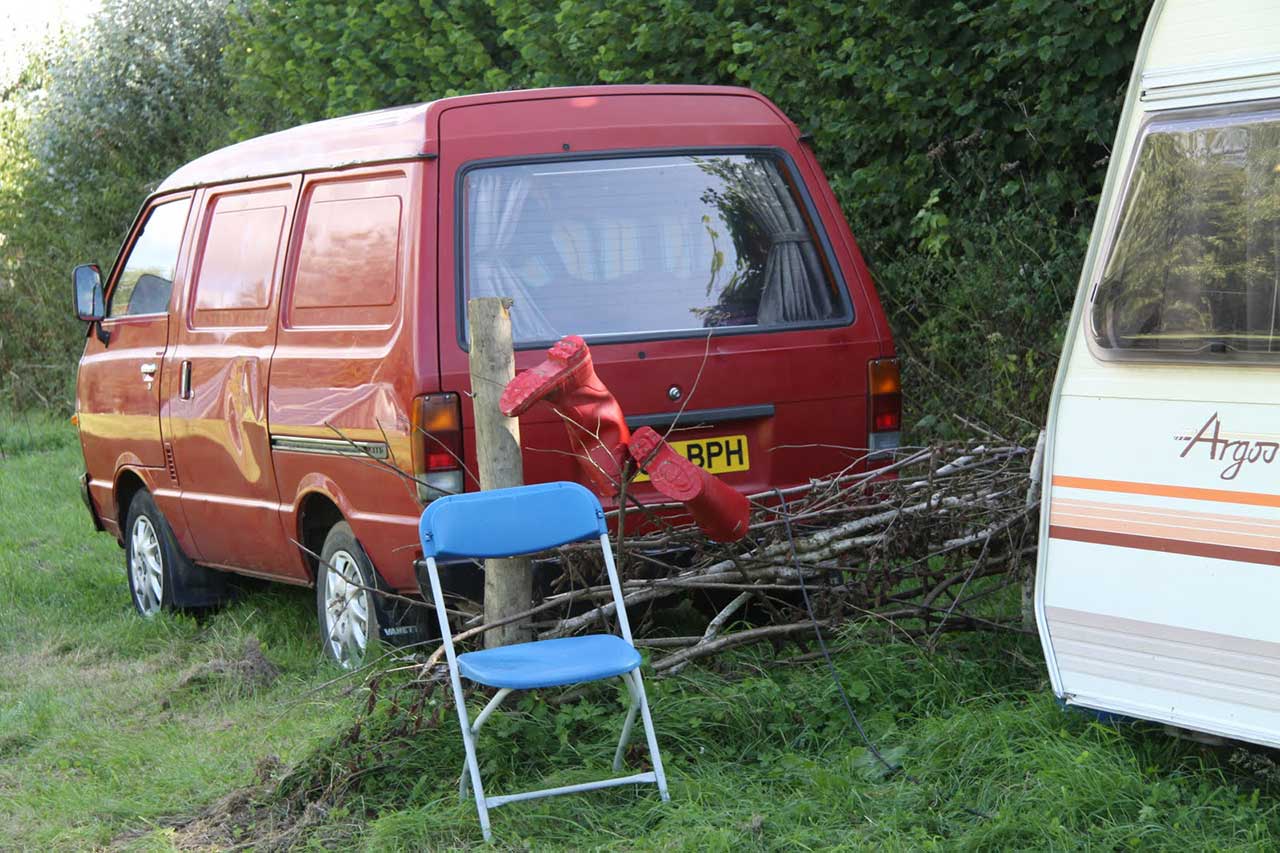 But no cuddly dogs in sight – John had installed a caravan in order to host two intrepid part time workers participating in World Wide Opportunities in Organic Farms, working and learning their way around the UK as they look for a smallholding of their own.

As we left John was preparing to harvest his apples. He was collecting hundreds of recycled bottles to wash and fill with home-made apple juice to be made during a bring-your-own apple pressing day he runs locally. All proceeds go to Oxfam. Which as you may tell from the top photo John also supports by buying his clothes.

I think he deserves a knighthood – but it’s my guess that Buckingham Palace would be too far in fuel for the carbon footprint to allow.